In a new study, we found that more than 1130 freshwater ecosystems, including lakes, rivers, reservoirs, ponds, across all continents except for Antarctica, have had severe cyanobacterial (blue-green algal) blooms in the last three decades. Over 80% systems were found dominated by the potentially toxic Microcystis species.

As the most common freshwater cyanobacterial genus, Microcystis is a unicellular microorganism that forms colonies. These colonies float, and form very large and smelly surface ‘scums’, which look like green ‘blankets’ covering the water surface.

The global success of Microcystis is partly attributed to the physiological characteristics of its colonies.

An important aspect of Microcystis colonies is that their large size allows them to float faster than any other freshwater cyanobacteria. This means Microcystis can develop and maintain a large biomass near the surface of lakes. These ‘floating scums’ may shade and inhibit the growth of less-buoyant species in deeper layers. Over time, accompanying species may fail to maintain viable populations, allowing Microcystis to dominate.

Over 50 Microcystis ‘morphospecies’ have been recognized. The morpho species are types of Microcystis that vary in their colony forms, mucilage structure, cell diameter and life cycle. These morphospecies vary in their ability to dominate lakes, so it is important to identify where they occur.

However, it is challenging to distinguish among these morphospecies. There is a lack of scientific agreement between classical taxonomy and modern molecular techniques.

In many lakes and ponds, different morphospecies dominate successively through the seasons. They usually vary from unidentified small colonies to the species M. ichthyoblabe in early spring, then M. wesenbergii and M. aeruginosa present until autumn (see image).

Through synthesizing previous laboratory and field studies, we emphasize in our study that the factors influencing competition among various closely related morphospecies are sometimes paradoxical because these morphospecies are potentially a single species.

We also propose that clarifying colony formation process could help fill the gap in the current classification of this genus. Doing so will enable lake managers to better control the blooms from the very beginning of colony formation. 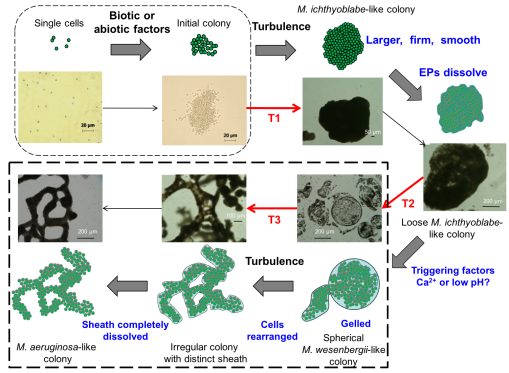 This work is online with Biological Reviews as: